My family and I are Dutch through and through, and proud of it. Growing up in West Michigan I didn't think anything of it, most of my classmates and friends growing up were Dutch, that's just how things are here. However, since moving to Detroit for school I realized that there really aren't that many Dutch people around. There are a few cities spread throughout the country with a substantial Dutch population, but other than that, there really aren't that many of us around.

I love having this background, learning about my heritage, playing Dutch bingo whenever you hear a Dutch name. There is one thing about being Dutch that I don't love though; I'm not a big fan of the cuisine. Now there may be some fabulous Dutch recipes out there, maybe I just haven't been exposed to the delicacies of the Netherlands, but as far as I know, Dutch food isn't all that exciting. There are a couple of dishes however that I absolutely love. Since it's Christmas I had to share this one. Banket is the quintessential Dutch Christmas treat (at least in West Michigan, I have absolutely no idea how much of it they actually eat in the Netherlands). 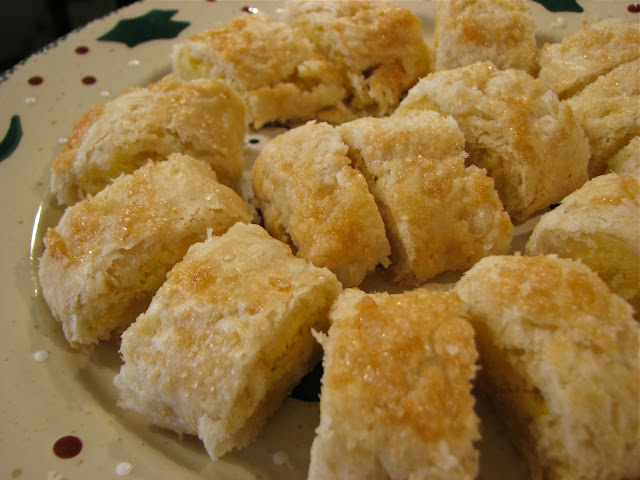 Banket is basically a flaky, buttery pastry wrapped around a filling of almond paste, eggs and sugar. I love the crackly, golden brown crust, the way the pastry almost shatters when you cut it, spreading pieces of crust everywhere. The almond paste filling is sweet and delicious. Almond at Christmas is the best.

This is actually the third year I've made banket. The past two years I tried using my Grandma's recipe, but the instructions were so vague I didn't really know what I was doing and the proportions of ingredients seemed just a little off. It still turned out quite tasty, it just never really looked like banket. This year it turned out beautifully, I was pleased, but it wasn't quite how I like it. The crust was perfect, but I like the filling to be a little looser. I may try adding more egg and cutting back on the cornstarch, I don't think my grandma had that in her recipe. My dad also told me that the crust needs to be darker (that's how his mom did it). I may use a whole egg or just an egg yolk for the egg wash and try baking it a little longer.

In my opinion, it isn't Christmas without banket. Now that I have a success under my belt I will have to attempt to perfect the recipe for the coming years. Even though this recipe isn't perfect in my option, it makes a wonderful pastry that I would be pleased to serve at my table, and I will this weekend! 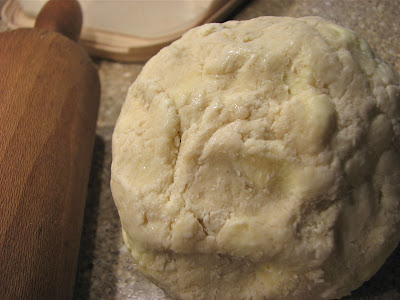 The dough, ready to go 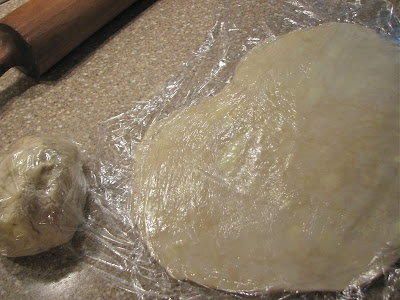 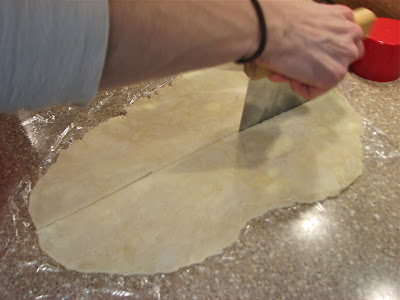 Cut each half in half lengthwise 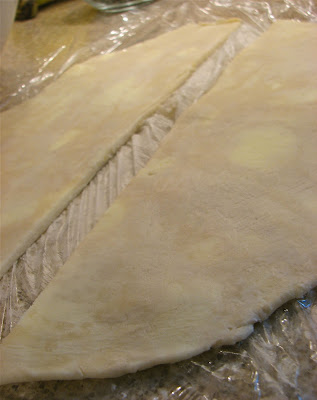 Look at the chunks of butter!
Chunks of cold butter = flaky dough 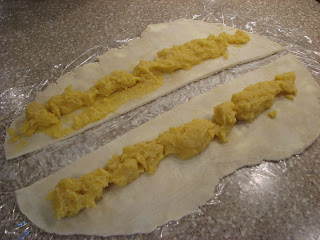 Put a quarter of the filling on each piece of dough 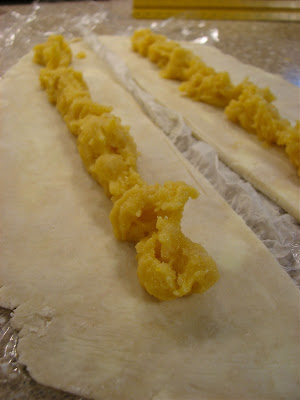 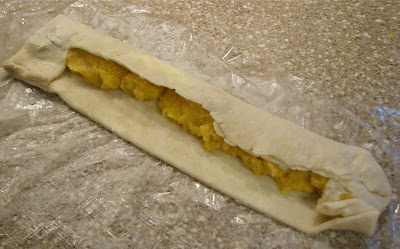 Roll each piece up, sealing the edges tightly 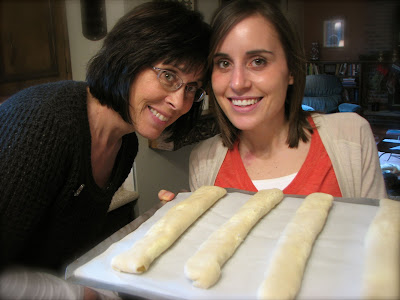 All filled and rolled, excited to eat! 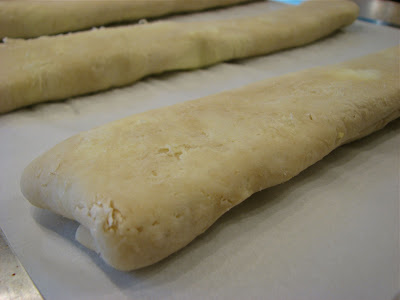 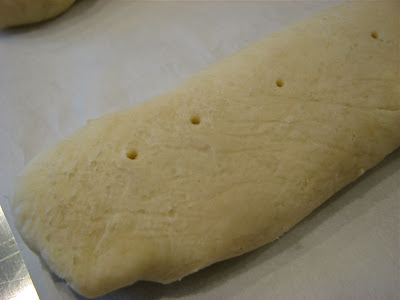 ...and polk some holes down the top 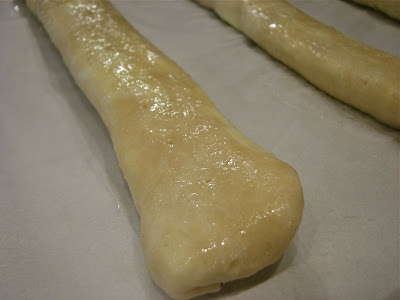 Then brush with the egg wash 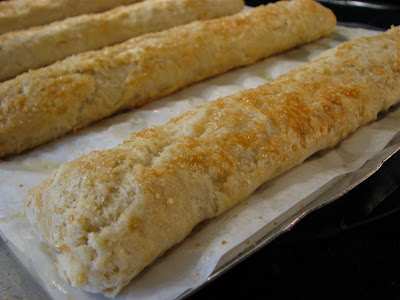 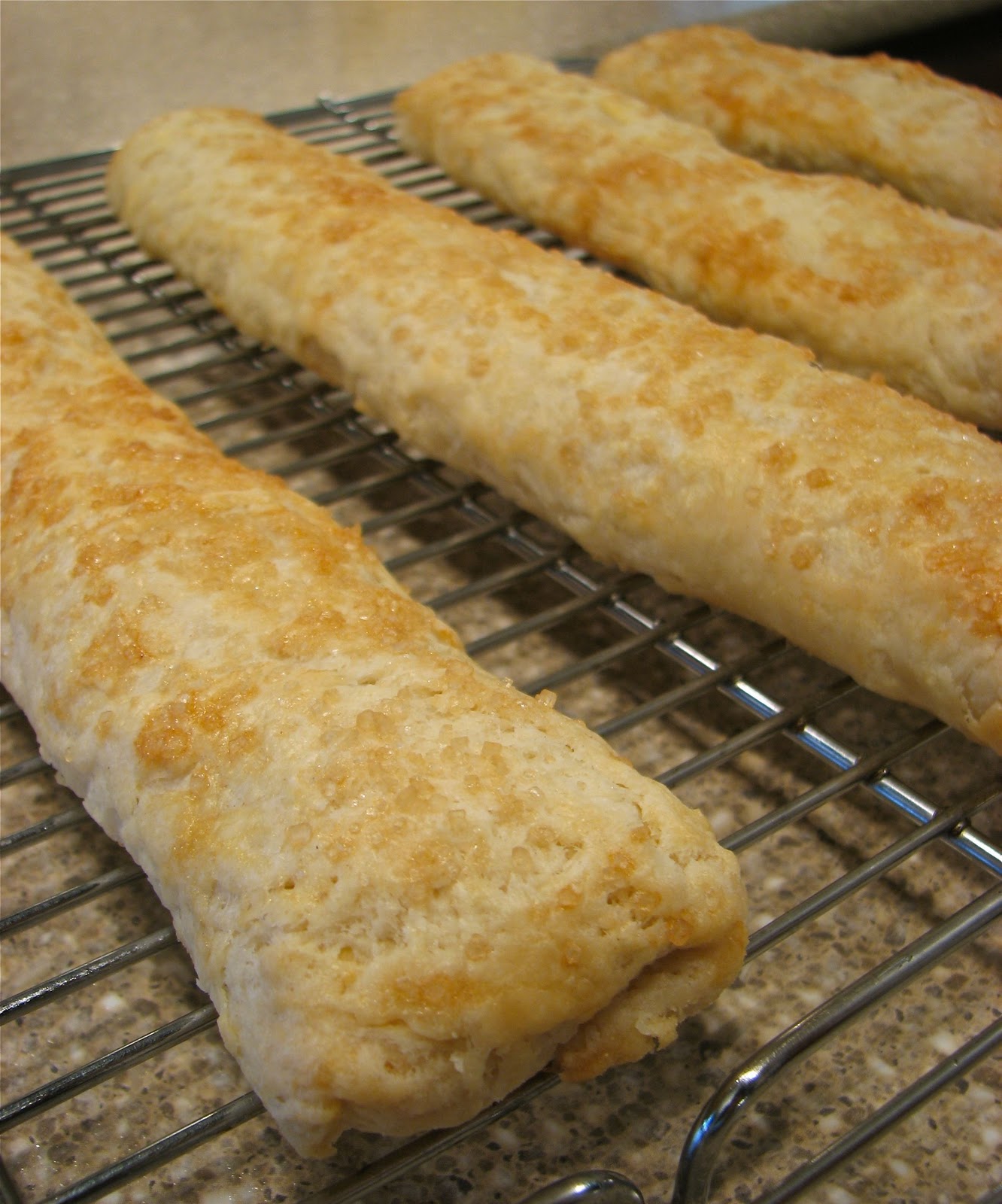 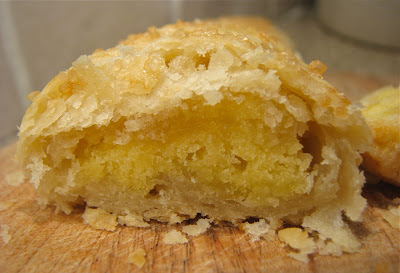 The inside, I like the dough and filling
to be more distinct 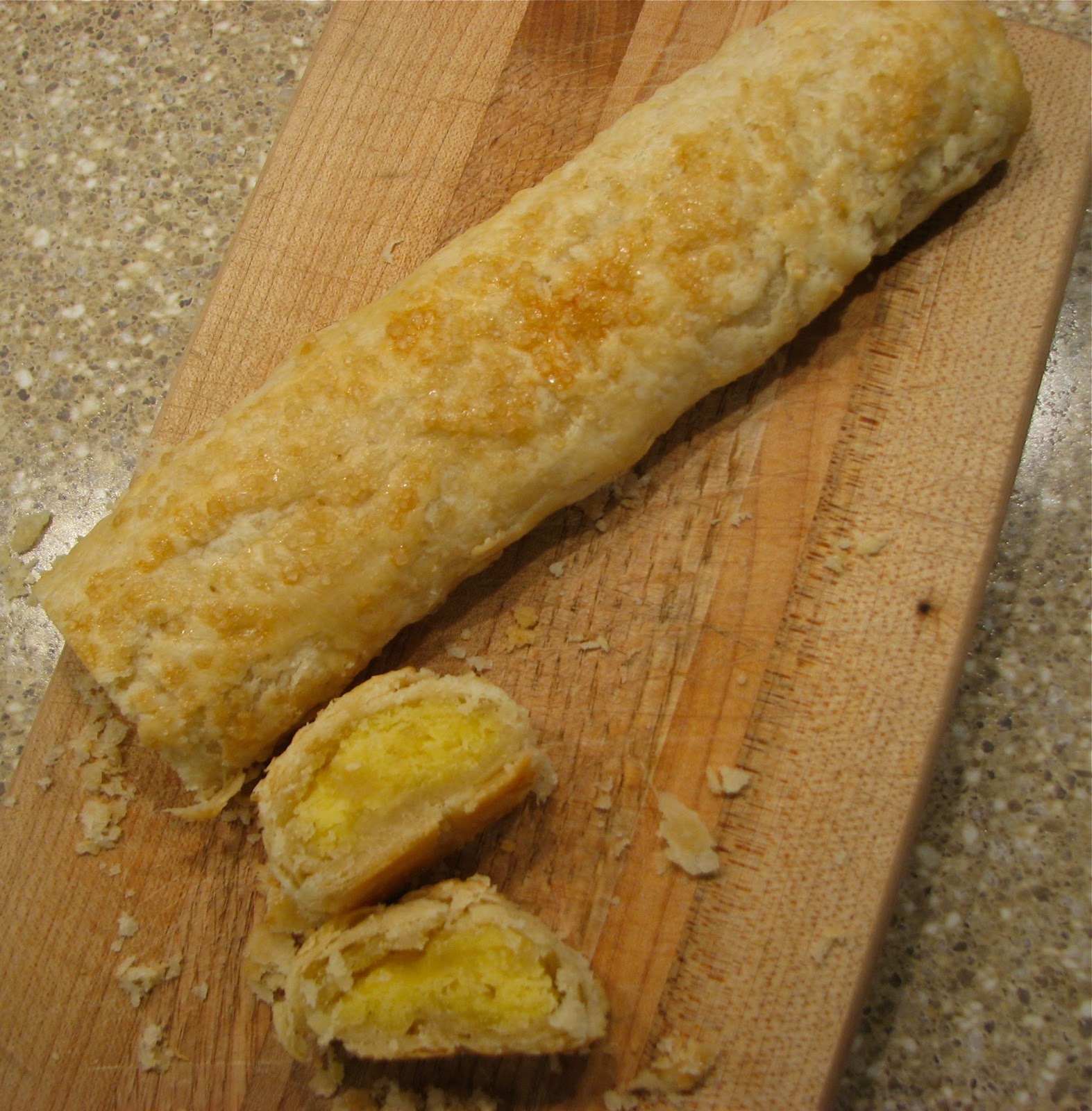 Cut it up into little bites 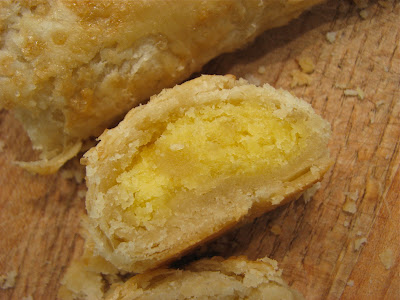 Let paste, sugar, egg, egg yolk and cornstarch stand in bowl for 30 minutes. Preheat oven to 400 degrees. Blend flour, butter and water in bowl like a pie crust. Add more water if necessary. Dough may be refrigerated overnight if desired.

When ready to prepare, divide dough into 2 equal parts. Roll each part of floured board to 8x13-inch rectangle. Cut lengthwise into 2 equal strips (4 strips, each 4x13-inches in all).

Prepare the filling by mixing the almond paste, sugar, eggs and cornstarch. Divide the filling into four equal portions and place one portion along the length of each piece of dough. Fold over the ends and then the long sides, moistening one side with water to seal before pressing together.

Place with seam side down on cookie sheet. Prick holes on top for air. Beat egg white and brush the top of the rolls. Bake for 14 minutes. Reduce head to 325 degrees and bake for an additional 20 minutes or until light brown.