I don't know about you, but in my opinion there is no such thing as too many banana bread recipes. I've made so many different recipes over the past few years (banana oat bread anyone? How about buttermilk banana bread, or Greek yogurt banana bread? And don't forget about sour cream banana bread or banana chocolate chip breakfast cake!) and I haven't ever been disappointed. There are a few key points to keep in mind however. First is don't over bake!! This is key. There is almost nothing as disappointing as a dry slice of banana bread. And second, don't start with a poor recipe. This one may not be as easy figure out, but if your new recipe is fat free, gluten free, dairy free or in some other way flavor free there is probably no way to salvage it. I'm not saying you can't find a good gluten free (or whatever free) banana bread recipe, but you have to be a little more careful when picking a recipe.

This cinnamon sugar banana bread recipe is the newest addition to my banana bread recipe collection and it certainly does not disappoint! It's full of oat-y goodness from some ground up oats that combine with whole wheat flour to produce a wonderfully chewy and hearty loaf. Some brown sugar adds a nice hint of molasses and a little butter adds richness. I decided to spice it up a little by adding a sweet cinnamon sugar swirl to the center of this loaf. It added a sweet and delicious surprise that really elevates this recipe to the next level. Another winner to add to your banana bread repertoire! 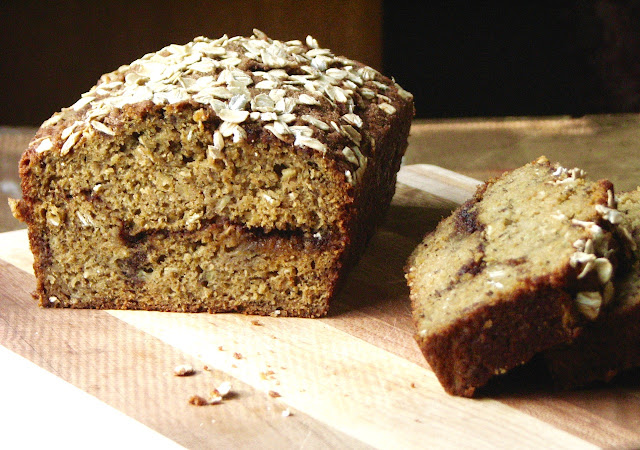 Now, I decided to go with the cinnamon sugar swirl this time, but the original recipe called for walnuts and chocolate chips (1/2 cup and 1 cup respectively) so that is another option if your feeling the need for some chocolate. Both are delicious so you really can't go wrong either way! 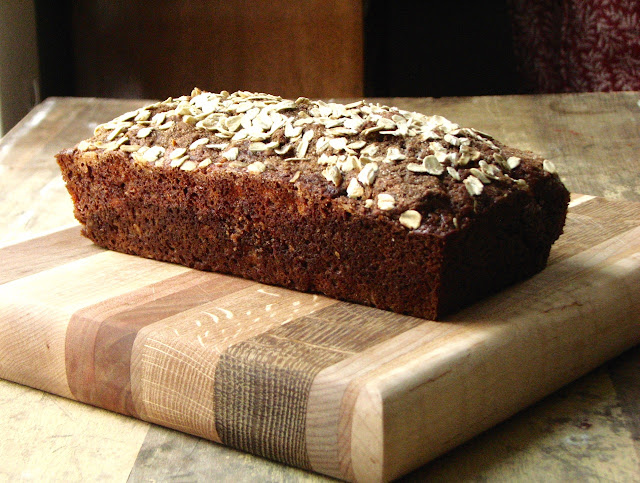 Preheat oven to 350˚and generously butter/oil a 8 or 9" loaf pan. In a small bowl, mix together the 1/3 cup sugar and the 1 tablespoon of cinnamon, set aside.

In a food processor, pulse oats until almost flour, not too fine, you want a few pieces of oats left. Pour into a large bowl and add wheat flour, baking soda, and brown sugar. Stir to combine

In a separate bowl, whisk together banana puree, butter, and eggs. Pour into dry ingredients. Stir until just combined (don't over stir!)

Bake for 45-50 minutes. Top should spring back lightly and when a toothpick is entered, it should come out with a few moist crumbs. Let cool and slice!