A few months ago I was searching for something new and different for dinner. I looked around online for something that looked simple and fairly quick, and yet yummy and different from what I normally eat. Since I was feeling like Italian, I looked at Lidia Bastianich's site Lydia's Italy and I came across this recipe. All I needed to go buy was a few pork chops, and some cheese, the few other ingredients were already in my fridge. Although this recipe only used these few ingredients, they melded together nicely to make a delicious and hearty meal, perfect to satisfy my craving for something new and flavorful. 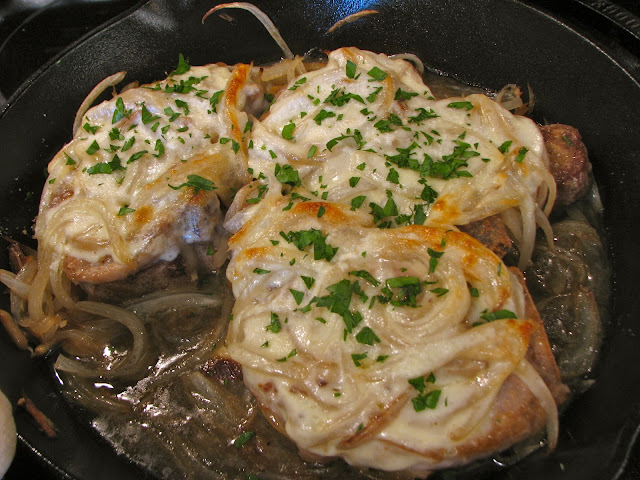 So all you really need to do for this recipe is brown up your pork chops until nice and crispy. Then just sauté up some onions until nice and soft, cover the chops in the onions and top with cheese. Pour in some wine and let it reduce a little bit, then throw the whole thing into the oven until the chops are cooked through. That's it. Pull them out of the oven and dig in!

Since I think that covering anything in cheese will make it better, these pork chops were definitely elevated by the melty, gooey provolone on top. The sprinkle of pecorino added a nice sharp bite which I love. The softened onions add such a nice gently onion flavor that goes so well with meat. To be honest I don't really love pork chops most of the time. I think they are pretty boring. But this recipe added just a couple of ingredients that really helped the chops shine! 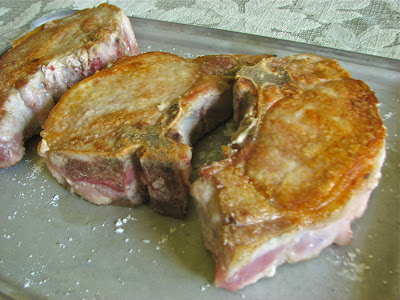 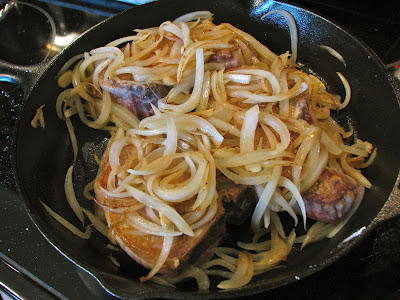 Cover with the softened onions 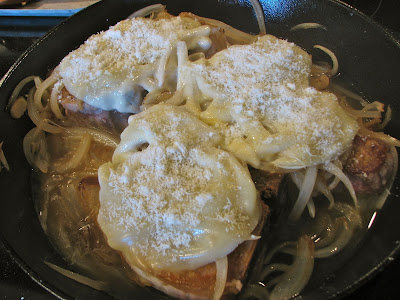 And don't forget the cheese! 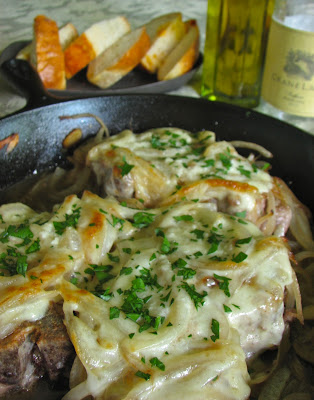 Directions
Trim excess fat from the pork chops, leaving only a thin layer on the edges. Season both sides of the chops with 1 teaspoon of the salt. Spread the flour on a plate, and dredge the chops, lightly coating both sides with flour.

Meanwhile, pour the olive oil in the skillet, and set it over medium heat. Shake excess flour from the chops, and lay them all in the skillet in one layer (depending on the size of your pan, you may have to snuggle them in). Gently brown the pork on the first side, about 4 minutes; turn the chops over, and brown the second side, another 4 minutes. Remove the chops to a plate and keep warm.

Scatter the onions and garlic in the skillet, stir them around the pan, season with the remaining salt, and cover. Cook the onions slowly, stirring occasionally, and scraping the pan bottom to mix the crusty browned bits with the onion juices.

Meanwhile, if you'll be finishing the dish right away, set a rack in the middle of the oven and heat it to 400 degrees. Slice the provolone into 3 or more thick slices about the size of the pork chops.

After the onions have cooked for 15 minutes or so, and are quite tender and colored with the pan scrapings, uncover, and push them all to one side of the skillet. Lay the pork chops back in, one at a time, spooning a layer of soft onions on the top of each chop. When they're all in the pan, lay the provolone slices over the onions.

Raise the heat, and when the meat is sizzling again, pour the wine into the skillet (in the spaces between the chops, not over them). Swirl the pan so the wine flows all through it, and bring to a boil. Sprinkle about a tablespoon of pecorino on each chop, then carefully move the skillet from the stove to the oven.

Bake the chops for 10 minutes or so, until the cheese toppings are bubbly and crusty. Carefully remove the skillet from the oven, and let chops rest in it for a few minutes. To serve, lift out each chop with a spatula, keeping the cheese topping intact, set it on a dinner plate, and spoon some of the skillet juices and onions around it.