A couple of summers ago I made a batch of homemade marshmallows that were really quite tasty, but the texture wasn't what I had been hoping for. They had been incredibly soft, delicious but soft. I had been hoping to be able to roast them over the campfire for a s'more, but there was not way they were going to not immediately melt off the stick and into the fire. But recently I've been wanting to try them again. Not because I'm a marshmallow fanatic, but just because I thought it would be kind of fun to try again. Since it was Christmas I thought that they would also make a fun gift, alongside my favorite homemade hot chocolate mix. A couple of soft and creamy homemade marshmallows floating on top of a mug of rich, decadent hot chocolate sounded divine.

I searched around for a recipe that sounded good to me and settled on this one from King Arthur Flour. The recipe stated that these marshmallows were more on the 'stiffer' side which was exactly what I was looking for. So I whipped a batch together and was extremely pleased as to how they turned out, stiff, yet still creamy and soft, just not oozingly soft which I did not want. They were exactly what I was looking for. And I have to admit, I did try some of the leftovers in a mug of hot chocolate, for quality control of course, and it was an outstanding combination. With a recipe like this, I may have to make marshmallows more often. 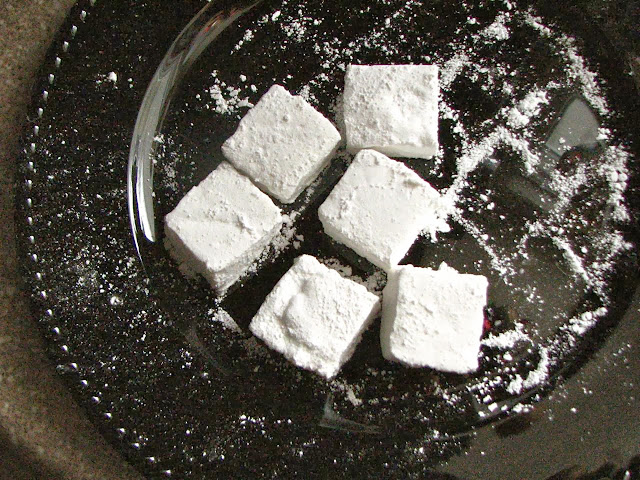 This recipe really couldn't be easier. It does require a candy thermometer and an electric mixer, but all the steps are very simple. I'm definitely not a candy maker, and they still turned out great. You will also need a package of unflavored gelatin, not something I normally have lying around, but easy enough to get your hands on. Other than that all you need is some sugars; granulated sugar and light corn syrup. Throw in whatever flavor you want after that (I stuck with straight vanilla for a classic taste, but I think some peppermint extract would be wonderful). That's it. Heat it up, mix it together and let it cool. Then you can cut it into whatever size or shape you want. A fun project for the holidays, or really any time of year! 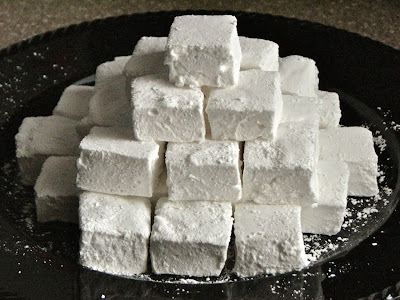 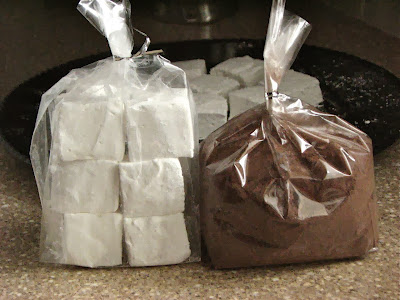 Combine the gelatin and 1/2 cup cool water in the bowl of an electric mixer fitted with the whisk attachment. Combine the sugar, corn syrup, salt, and 1/2 cup cool water in a small, deep saucepan. Cook the mixture over medium heat, stirring, until the sugar dissolves. Raise the heat to high and cook, without stirring, until the syrup reaches 240°F on a candy thermometer. Remove from the heat.

With mixer on low speed, slowly pour the sugar syrup into the softened gelatin. Increase the speed to high, and whip until the mixture is very thick and fluffy, and has cooled to lukewarm, 3 to 10 minutes (depending on the mixer and attachment you use; a stand mixer using the whisk attachment will work more quickly than a hand mixer equipped with beaters). The mixture should be cool enough that you can spread it into the pan without burning your fingers, about 95°F. Add vanilla towards the end of the mixing time.

Spread the marshmallow mixture into a greased 9" x 13" pan (glass or ceramic is best). Use your wet hands to smooth and flatten the marshmallows. Sprinkle confectioners' sugar over the top, and let sit for several hours (or overnight) before cutting. Use a greased knife or cookie cutters to make squares or other shapes. Yield: about 100 1" squares.