It's been a busy couple of weeks with school starting, and over the labor day weekend I was involved in my cousin's wedding so I was unfortunately unable to post anything last week, too much craziness. Hopefully I can make up for that today. I don't have a recipe this time, but I did want to share some photos from my trip to Washington this summer. In July I spent 4 weeks in Vancouver, Washington working at New Heights Clinic, a church based health clinic for the underserved. It was a great experience and I learned a lot from my time there.

Thankfully I also had a lot of time in my month there to explore the area and get to know this part of the country. And what did I focus on, the food culture of course. I received so many recommendations of places to visit and foods to try that I couldn't even begin to do it all. I did however manage to get a pretty good sampling of some of my favorite things. In other words, I visited a lot of coffee shops and bakeries! Washington has some great coffee that is for sure, and I enjoyed it immensely. It was a great trip, great experiences, and great food! 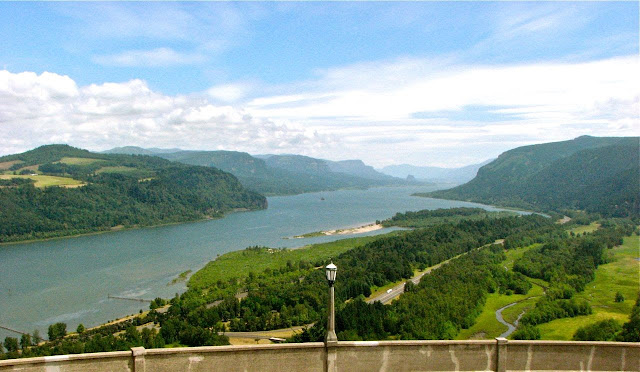 One of the doctors from the clinic showed me around the area on my first weekend. She drove me along the Columbia River Gorge for some beautiful scenery and magnificent waterfalls. We finished up our tour at La Bottega Cafe and Deli, a cute little Italian restaurant with fantastic sandwiches, the perfect place for lunch. I decided on the Giuseppe; prosciutto, salami, fresh mozzarella, roasted garlic mayo and tomato basil vinaigrette on ciabatta. I'm a sucker for cured Italian meats. Since it was July I had to get the berry crisp for dessert, a la mode of course!

Also on my first weekend, I headed across the river to Oregon to check out the Portland farmer's market. I had a wonderful time taking in all of the fresh fruit, baked goods, flowers and the people. I loved the fresh seafood too, we just don't have that at our farmer's markets back in Michigan. The colors, smells and sounds of an early morning farmers market make me happy. 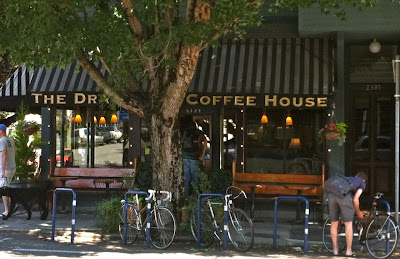 After the farmer's market I needed some coffee, so I drove around until I found just the right place. The Dragonfly Coffee House. It was a small little place, but cozy and relaxing, perfect for enjoying a late morning coffee and cookie. 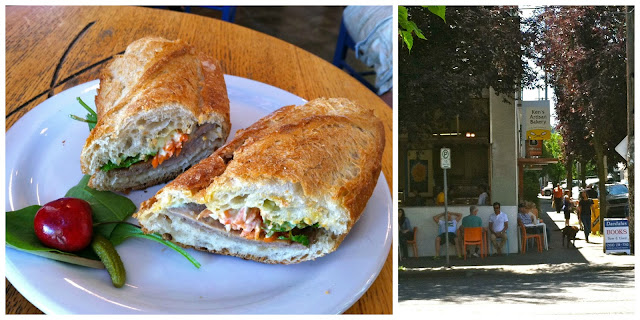 For lunch I drove around a little more until I found Ken's Artisan Bakery, one of the bakeries on my list. It took me a while to find it and then find parking, but boy am I glad I did! I ordered the banh mi; 5 spice pork terrine, pickled daikon carrots, wasabi mayo and sriracha on a baguette. One of the best sandwiches I've had, all thanks to the baguette. It was crisp and crackly on the outside without being hard or tough, and the inside was pillowy, soft and super tender. I wish I could go back everyday for a baguette. I also bought a loaf of ciabatta to take home, which was just as fantastic. A very successful lunch. 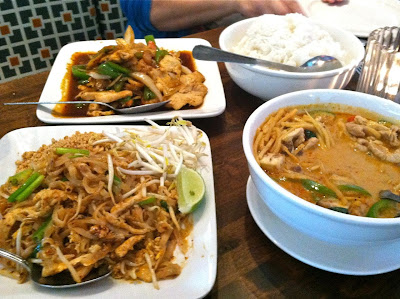 One night I went out for Thai with some people from the clinic to a place called Thai Orchid in downtown Vancouver. I'm no Thai connoisseur but I thought it was delicious. We ordered all kinds of different dishes and ate them family style so I got to try a little bit of everything. 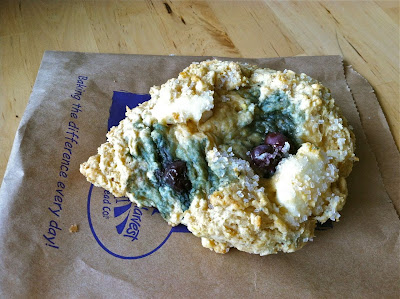 My breakfast one morning from Great Harvest Bread Company. I kind of felt like I was cheating since we have a couple Great Harvest's in the Grand Rapids area, but my blueberry cream cheese scone was so good I didn't even care. 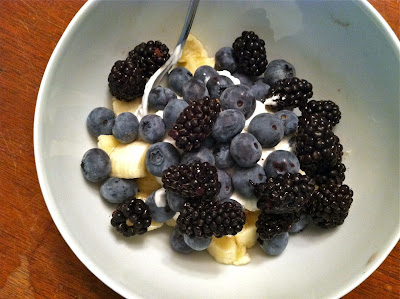 Basically my life while in Washington; fresh fruit and yogurt for breakfast. There were berries galore the whole time I was there. The family I was staying with also had a few blueberry bushes that were exploding with berries. I picked and ate more blueberries in a few weeks than I've eaten in my whole life up until this point. I have now officially become a blueberry lover, but I've been spoiled with the freshest, most plump and juicy berries, I don't think I can go back. 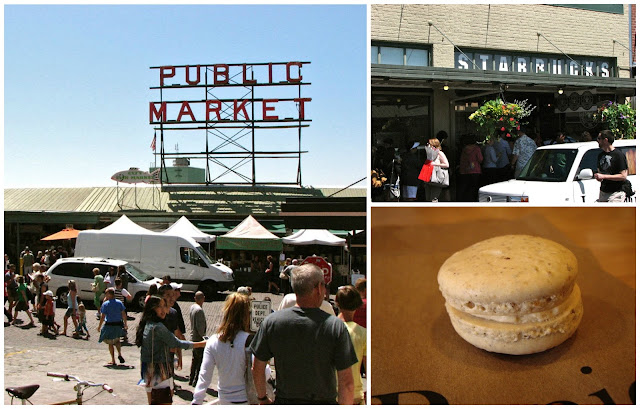 I was able to drive up to Seattle one weekend to see the city and visit my friend Hannah from college. To start out with I visited Pike's Place Market. It was one place I had to see. The whole experience was super interesting, there was so much to see, so many different people and all kinds of restaurants and food booths and knick knack-y shops. Of course it was crazy busy, but I managed to explore and get a good feel for the place. 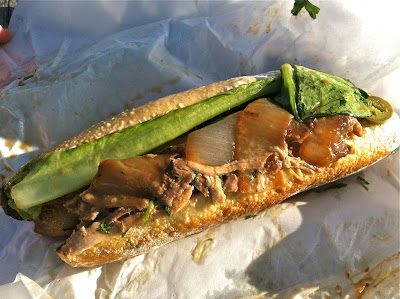 For dinner my first night in Seattle, my friend brought me to Paseo, just down the street from her apartment. We both got the Caribbean roast sandwich which was to die for. Absolutely one of the best things I've ever put in my mouth. It may not look like much but it was so incredibly good. Pork shoulder, coated in their special marinade, slow roasted until falling apart, served on a lightly toasted baguette slathered with aioli, fresh cilantro, pickled jalapeños, a leaf of romaine and caramelized onions. What a mess, a fantastic mess. 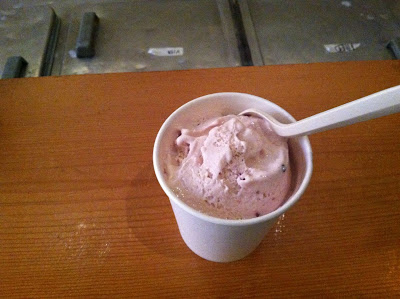 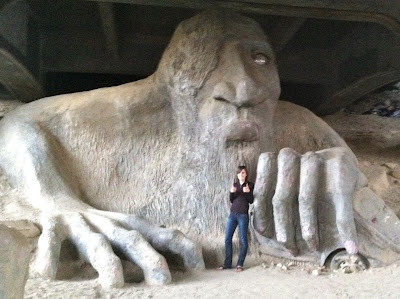 We walked around the neighborhood a little bit, and I met a troll! 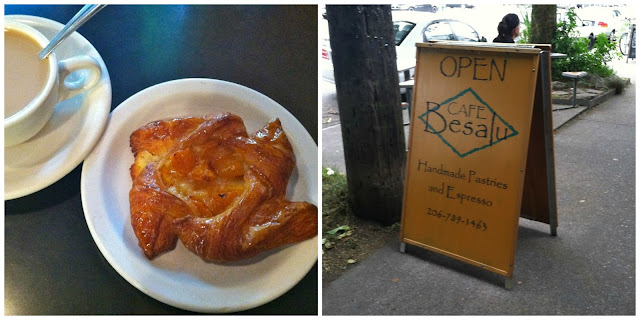 Breakfast the next morning at Hannah's favorite bakery, Cafe Besalu. A tiny little shop with top notch croissants and danishes. We were there early, around 8, and the line was already out the door. I got the apricot danish, delicious.

Coffee break at Ballard Coffee Works. The perfect place to spend the dreary morning with a cappuccino, catching up on some emails. 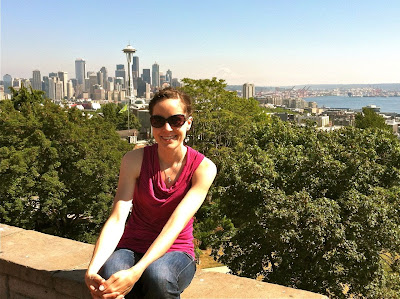 The sun came out in the afternoon and we headed to Kerry Park to get a great view of the city. 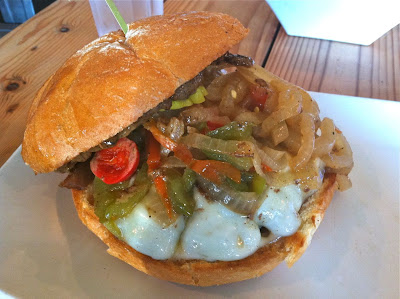 Dinner was burgers and fries at Uneeda Burger, a casual burger shack with lots of character. Tons of different options for burgers and homemade shakes, I could hardly decide what to get. I decided on the Philly smash; charred peppers and onions with swiss and their special sauce. Sometimes I just need a burger, and this was one of those times. The perfect way to finish off the day. 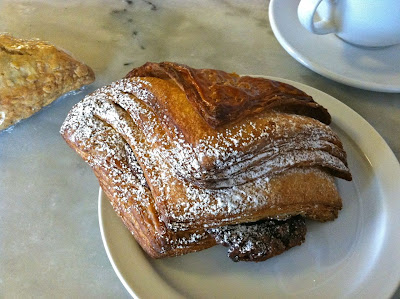 One last breakfast in Seattle before heading back to Vancouver at Fresh Flours. This place was interesting because they had not only the basic breakfast options, croissants, scones and danishes, but they also had some Japanese influenced pastries. It was a kind of Japanese-French fusion, not something I would ever think of but I decided to give it a try and went with the Azuki croissant. Basically a basic croissant folded over slightly sweetened bean paste. I really did enjoy it immensely. The croissant itself was very flavorful and flaky, and the mild filling adding just a hint of extra sweetness. 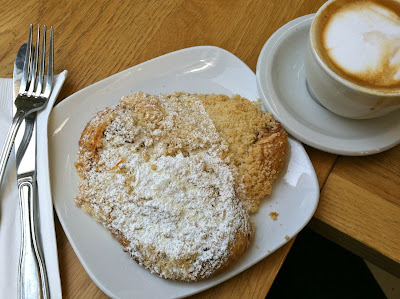 Back in Portland the next weekend, trying out Lovejoy Bakers which was just wonderful. A bright and busy contemporary bakery with windows everywhere, and so many delicious and fun options to try. Tons of great outdoor seating as well. A wonderful place to spend a sunny summer morning. I opted for the butterhorn, with a name like that it was just impossible to pass up. I don't know exactly what it was, but I know a lot of butter was involved, and the whole thing was covered with a delicious layer of streusel. It seemed like there was some kind of laminated dough hiding in there, but it's hard to know. 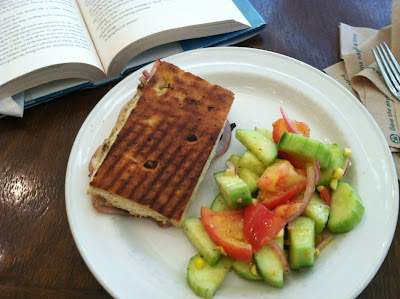 A nice little cafe was lunch for the day. Grilled ham and swiss with a fresh cucumber salad. Sometimes the basics are just the right thing. 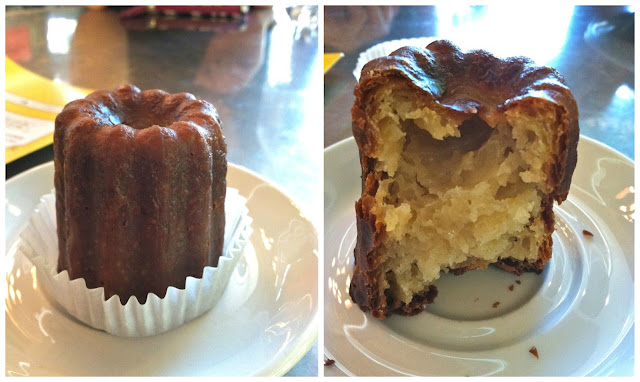 A friend I met at the clinic took me hiking in Portland which turned out to be a lot of fun. Who knew there were some great hikes in the actual city. It's hard to believe that these two worlds are so close to one another. The end of our hike brought us by another awesome French bakery; St. Honore' Bakery. It was packed with people, which was good because it gave me time to look around, and there was so much to see. They not only had amazing looking bread, but the cases were full of cakes, tarts, eclairs, pies, danishes, croissants, quiche, and sandwiches, to name just a few. It was wonderful. We only stopped for a few minutes, but I managed to buy a canele' to try. I've always wanted to try one so when I saw it I knew I had to give it a go. It was absolutely delicious, a crisp and firm outer layer gave way to a smooth, custardy inside. Eggy with a hint of rum, so good. 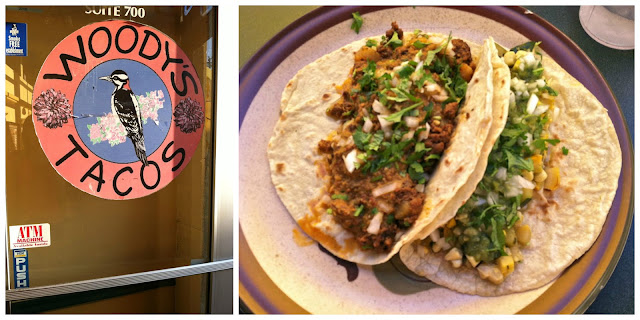 My host family took me out for dinner one of the last nights I was around to one of there favorite local spots, Woody's Tacos. It was kind of a hole-in-the wall, lots of fun. They had a ton of different options for tacos to try. I decided on roasted corn and grilled zucchini with roasted tomatillo, avocado and green chili salsa and a homemade chorizo and potato taco with fire roasted salsa, both very tasty. And the atmosphere was fun too, sitting outdoors under cheerful yellow umbrellas. 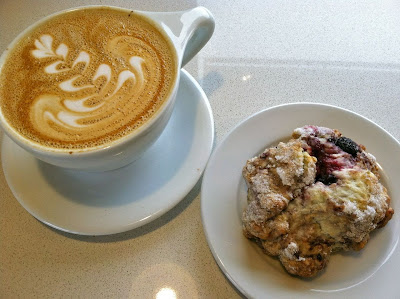 Thatcher's Coffee became my go-to coffee shop in Vancouver. Great coffee, great atmosphere, and it was located pretty close to where I was staying. It is located in a strip mall in a newly developed area, so the first time I went there I didn't really expect much. From the outside it doesn't look special in any way. Inside however is a different story. It's on the end of the strip of stores, and so basically the entire side of the shop is windows letting in so much beautiful natural light. The decor is modern yet warm which is how I like it. Plenty of seating and free wifi rounded out this wonderful spot. I only ever got coffee except the last time I went. I had to splurge on my last day for a berry scone, and it was worth it. Huge and tender and sweet and delightful, a perfect way to say goodbye. 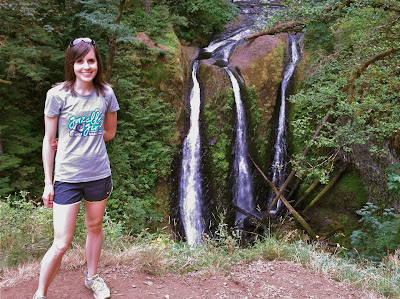 My friend from the clinic took me on one last hiking adventure before I had to leave. We went about 5 miles I think to see several waterfalls and some beautiful scenery. We ended up at triple falls which you can see from the picture is an apt name. The northwest sure is some beautiful country. 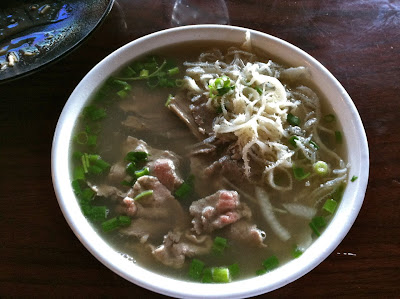 One last night out before I went home. I went out with one of the doctors from the clinic to Pho Green Papaya to get some pho. I'd never had pho before, and so didn't know what to expect. I was pleasantly surprise with this flavorful Vietnamese soup. It was full of different cuts of meat and noodles, and we could customized it however we wanted with fresh basil, jalapeños, lime juice and bean sprouts. It is definitely something I'd like to try again. 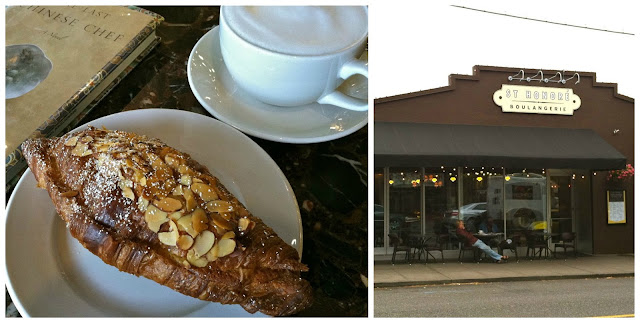 And on my last morning in Washington, I had to drive back in to Portland to spend some time at St. Honore' Boulangerie. I really wanted to enjoy a leisurely breakfast of coffee and a freshly made French pastry. Deciding on what to buy was difficult, but I finally settled on the almond croissant and it was absolutely fantastic. Crispy and flaky on the outside, and creamy and custardy on the inside. I don't know how they do it, but I was in heaven. It was a fitting way to end my culinary explorations of the northwest. I will definitely miss all of my delicious finds!