In high school I worked in food service at a retirement home, serving food to the residents, as well as prepping for meals and cleaning up. Certain foods will forever be linked in my mind to this experience, one of them being cinnamon toast. Cinnamon toast was a resident favorite for breakfast, and to this day, every time I smell the toasting of cinnamon bread it brings me back to those days.

This recipe produces bread that is far superior to that served in the retirement home, but it still gives off that same wonderful sugary-cinnamony smell as it toasts up to golden perfection in the toaster. Smeared with some butter and sprinkled with a little more cinnamon, because why not, this bread is a wonderful way to start the day. 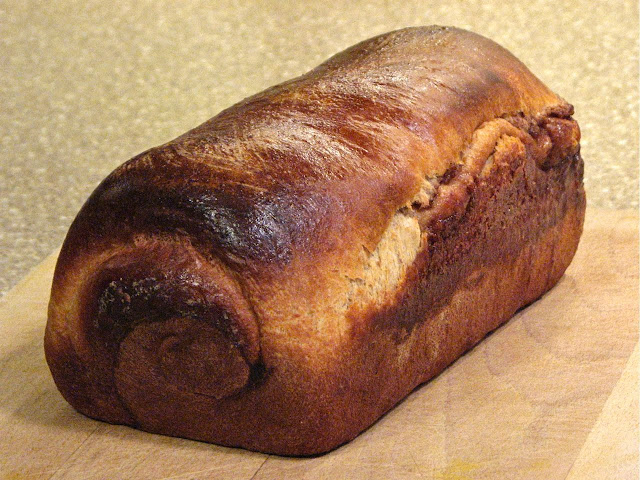 The only problem I had with this bread was while it was baking. Partway through I smelled some burning and realized that some of the sugar had leaked out of the bread and had fallen to the floor of the oven where it was burning. Not the best smell. A few moments later, this blob of burning sugar then burst into flames! It wasn't too bad, and quickly died out, but I just want to warn you that this could happen. It's probably a good idea to put a baking sheet (lined with foil for easy clean up) under the loaf pan while it is baking. I also recommend covering this bread with foil halfway through, or even earlier, to prevent it from getting too brown. But however it comes out, it makes great cinnamon toast! 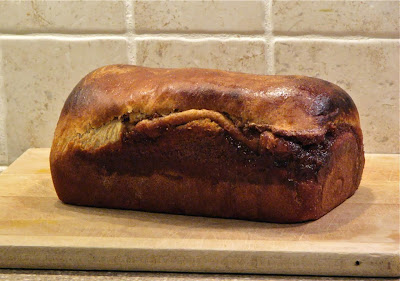 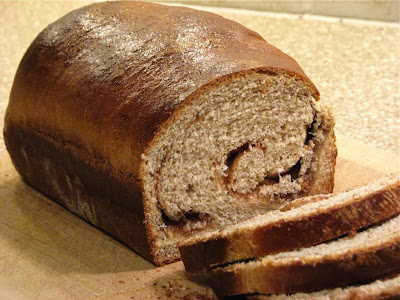 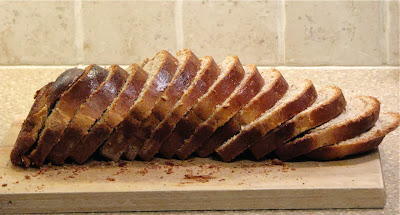 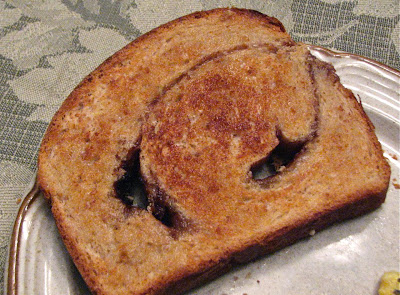 Transfer the dough to a lightly oiled bowl, turning once to coat. Cover the bowl with plastic wrap or a clean kitchen towel and let rise in a warm place until doubled in bulk, about 1 hour.

Turn the dough out onto a lightly floured work surface. Pat into a round. Fold the bottom third of the dough up and fold the top third down, like a business-letter. Then fold the right and left sides into the center in thirds, forming a rectangle. Press down to seal. Return to the bowl, cover and let rise again until doubled, about 40 minutes.

Generously butter a 9 by 5-inch loaf pan. To make the filling, combine the sugar, cinnamon and water in a small bowl and whisk until well combined.

Return the dough to a lightly floured work surface. Roll the dough into a 10 by 12-inch rectangle. Brush lightly with the beaten egg. Sprinkle with the cinnamon-sugar mixture, leaving a thin border around the edges. Fold in the edges of the long sides of the dough about 1 inch.

Beginning with one of the short ends, roll the dough up into a tight spiral log, gently pressing as you go. Pinch the seam shut, and place the loaf seam side-down in the prepared baking pan. Cover loosely with plastic wrap or a clean towel and let rise until the dough rises just above the edge of the pan, about 30 minutes.

Meanwhile, preheat the oven to 425˚ F. When the loaf has risen, brush the top of the loaf lightly with the remaining beaten egg. Bake, rotating the pan halfway through, until the loaf is golden brown, about 45 minutes. If the surface seems to be browning too quickly, tent loosely with foil. Cool in the pan 5 minutes, then turn the loaf out and transfer to a wire rack to cool completely before slicing.